These Are The Top 50 Hedge Fund Long And Short Positions

These Are The Top 50 Hedge Fund Long And Short Positions

According to the poor financial results in the first quarter of the year, the top primary silver miners are now likely paying the market $2 an ounce to take their silver.

In Goldmans latest quarterly hedge fund trend monitor – a survey of 808 hedge funds with $2.1 trillion of gross equity positions ($1.5 trillion long and $649 billion short) – which analyzes hedge fund holdings as of Dec. 31, the bank makes some interesting observations about the current state of the hedge fund industry.

First and foremost, it finds that the average hedge fund is up a paltry 1% YTD as of Feb 20, underperforming the S&P for the 8th consecutive year. This follows on the heels of a 13% return for equity funds in 2017, the strongest annual absolute return since 14% in 2013 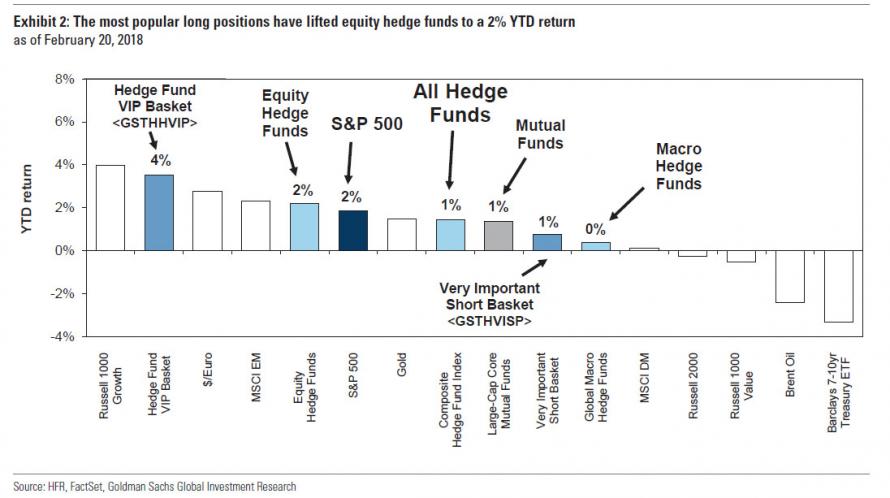 Below are Goldmans 5 key observations from this edition of the HF Trend monitor:

The average equity hedge 1. fund has returned 2% YTD, matching the S&P 500. The most popular hedge fund long positions have resumed their 2017 outperformance in early 2018. Funds returned  13% in 2017. Our Hedge Fund VIP basket of most popular long positions has returned 4% YTD, outperforming the S&P 500 during the recent correction in contrast to its typical drawdown behavior. Our growth and momentum factors and the Info Tech sector have outperformed alongside our VIP basket, aiding fund returns following weakness in late 2017.

Hedge funds entered 2018 with near-record leverage and maintained risk despite the correction. Funds added nearly $20 billion of net exposure in two index ETFs alone (SPY and IWM) as ETF exposure rose to 3% of long portfolios. Although the S&P 500 suffered its first 10% decline in two years, funds maintained conviction in their positions. Portfolio turnover rose slightly but remained near recent record lows at 28%.

Hedge fund sector allocations remained largely stable, with funds declining to rotate toward perceived winners of tax reform and rising interest rates. Information Technology remains the largest sector weight (24%) although funds trimmed the overweight tilt relative to the Russell 3000 to +107 bp from +307 bp last quarter. Consumer Discretionary is the largest overweight tilt (+432 bp), but positions in the Consumer Discretionary and Energy sectors remain near the smallest tilts that funds have held in those sectors during the last five years. Funds added to their overweight in Health Care (+354 bp) while Financials remains the largest net underweight (-445 bp).

One especially interesting observation is that the most crowded hedge fund positions, i.e. Goldmans Hedge Fund VIP basket, outperformed, as it appears that hedge funds rushed to the safety of crowded positions during the recent market swoon, hoping that others had done their homework and that these stocks would not get sold.So far, this assumption has proven correct.

The outperformance of the most popular hedge fund positions during the recent correction underscores the technical nature of the drawdown and the resilience of investor sentiment. As the S&P 500 suffered its first 10% decline in two years, our Hedge Fund VIP basket declined in absolute terms but outperformed both the broad market and the largest short positions. This outperformance stands in contrast to the baskets typical high beta behavior; the most popular stocks typically underperform during market drawdowns as investor selling weighs most heavily on their top positions 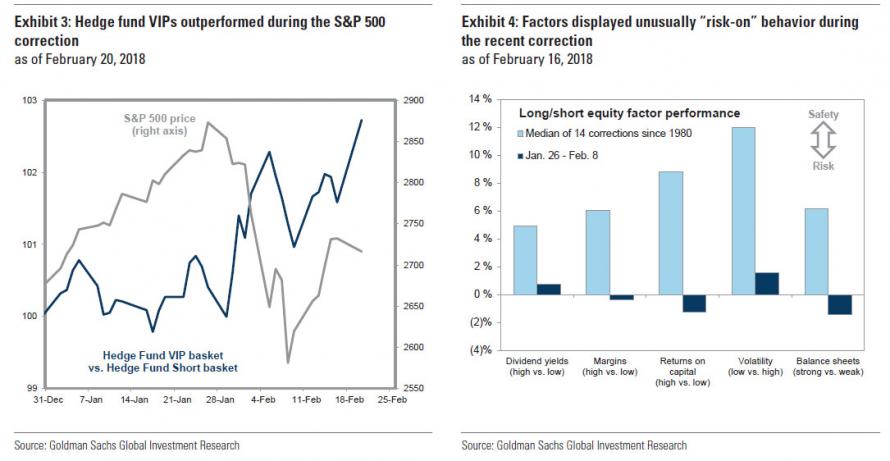 Goldman also touches on a topic wediscussed earlier in the context of the Feds Monetary Policy Report, which warned about record hedge fund leverage.

To be sure, hedge funds continued the trend observed last quarter, as elevated investor positioning at the start of 2018, including hedge fund leverage, remained and according to Goldmans David Kostin helped explain the sharp S&P 500 drawdown. Specifically, funds added net leverage entering 2018, anticipating continued strength in equities following the passage of tax reform and a 7% S&P 500 return in 4Q 2017.

Our analysis of fund filings and short interest data suggests that funds carried a net long exposure of 56%, above the long term average and nearly the highest level on record.

Furthermore, data from Goldmans Prime Services on exposuresshowed extremely elevated net and gross leverages prior to the market correction.And although net leverage dropped briefly during the correction, Goldman Primeattributed the decline to mark-to-market dynamics in options positions. Meanwhile, both gross and net exposures currently remain close to recent highs.

Also notable: the lack of trading volumes continues to be explained with one simple observation: hedge funds continue to boycott turnover – and trading  even as they concentrate even more into the top 10 positions.The average hedge fund held 68% of its long portfolio in its top 10 positions, just below the record density of 69% in 1H 2016.The increase in hedge fund portfolio density in recent years mirrors the growing share of S&P 500 market cap accounted for by the 10 largest index constituents, which now sits just above the average level since 1990 (22%). 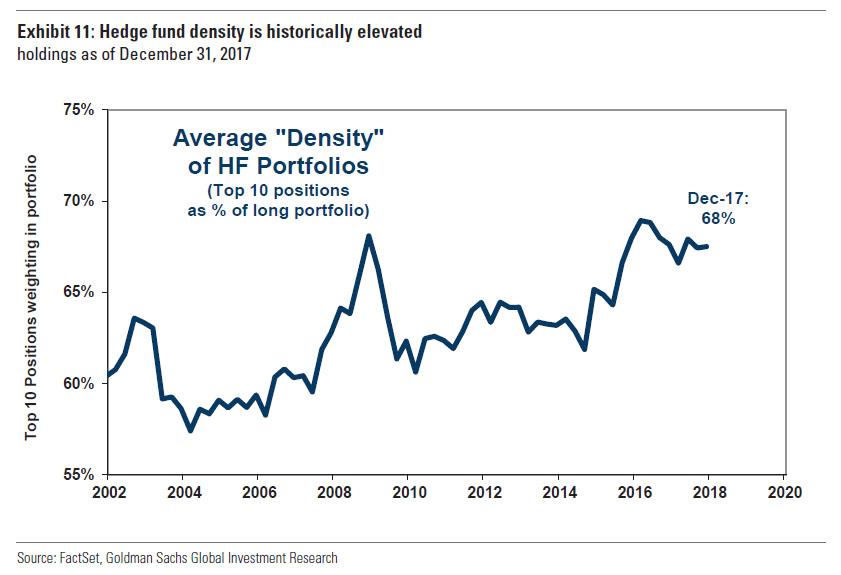 Separately, while hedge fund portfolio turnover rose slightly from a record low during 4Q,funds clearly remained committed to their top positions.Across all portfolio positions, turnover registered 28%. Turnover of the largest quartile of positions, which make up the vast majority of portfolios, also rose slightly to 14% but remained near historical lows. 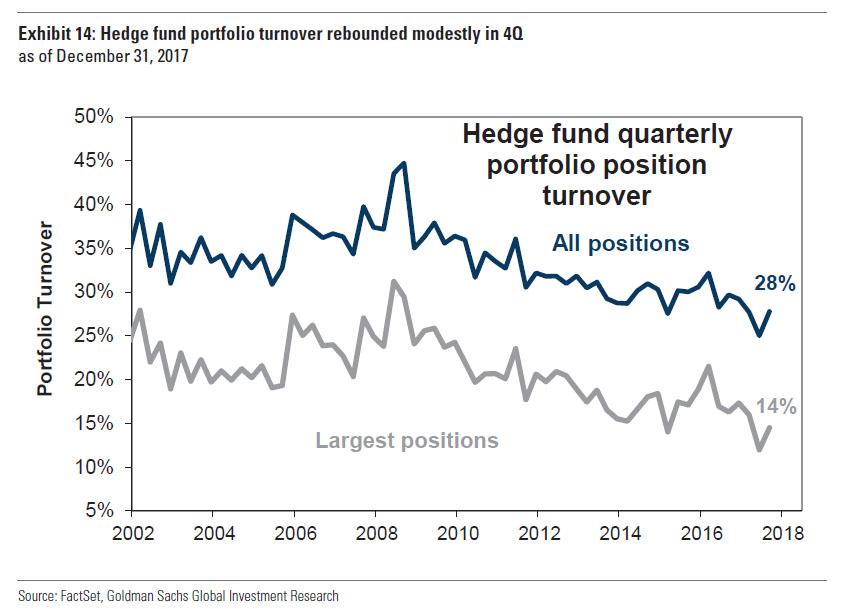 So putting it all together, below are the 50 hedge fund positions compiled by Goldman which make up the latest GS VIP list, i.e.,the 50 most popular hedge fund longs, also known as the Hedge fund Hotel California.

What is notable about this basket, is that it tends to outperform the S&P in most periods, and did so by 170 bp YTD (3.5% vs. 1.9%) and in 64% of quarters since 2001. But this outperformance comes at a cost: if and when the selling begins, as it did in thespring of 2016 when Valeant implodedand blew up the pharma trade… 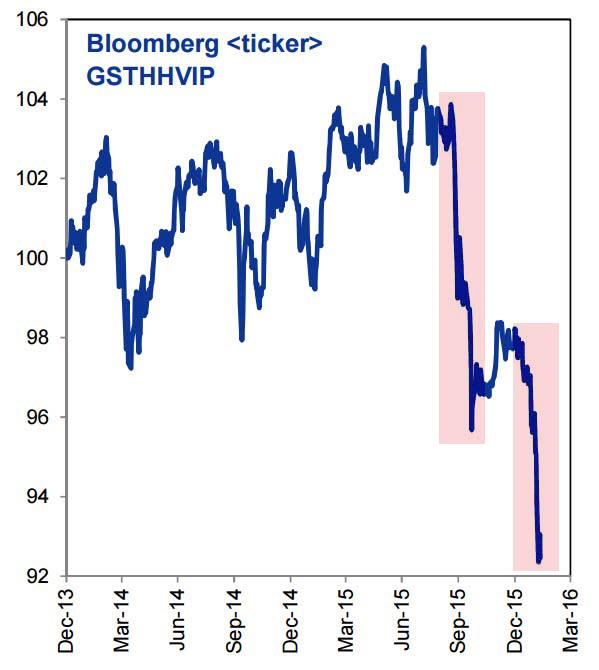 … the basket tends to get hit especially hard: quote Goldman,although the basket has been a strong historical performer, it suffered its worst historical underperformance vs. the S&P 500 in late 2015 and 1H 2016 (-17% vs. -3%).But good news followed, because thanks to another coordinated central bank intervention (the Shanghai Accord) the basket then rallied back to outperform the S&P 500 by 21 percentage points (+52% vs. +31%) between 2H 2016 and early 4Q 2017. 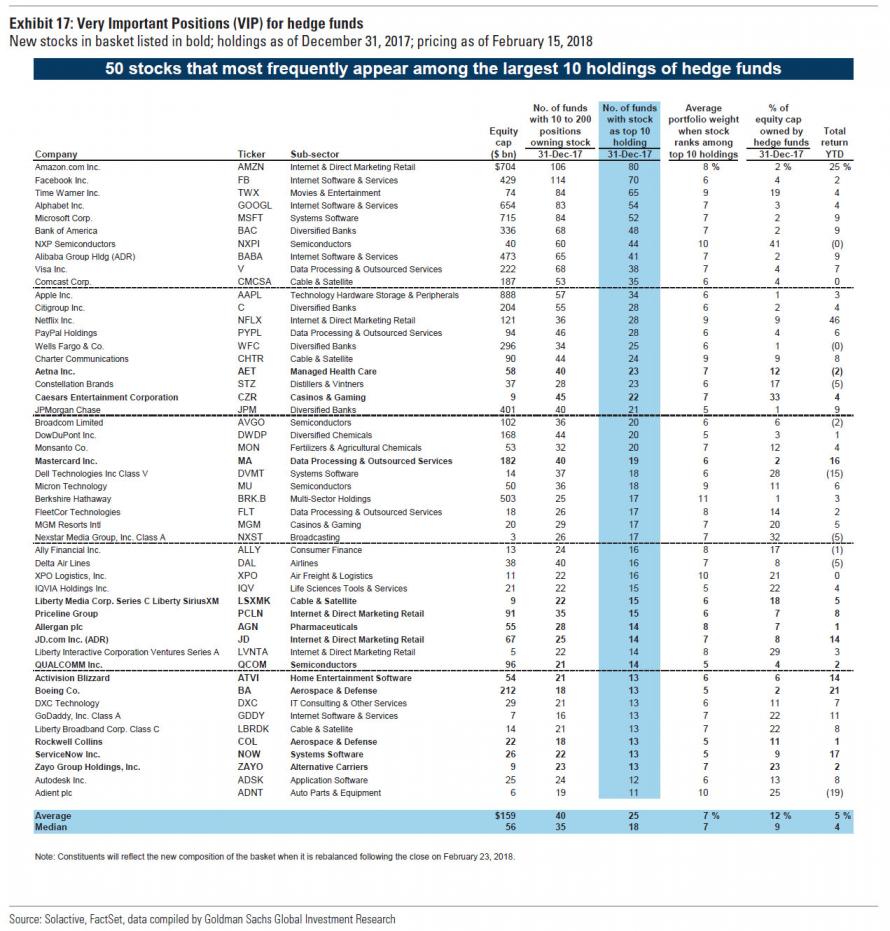 Conversely, below are the 50 most shorted positions, i.e., the stocks which represent the most important short positions. 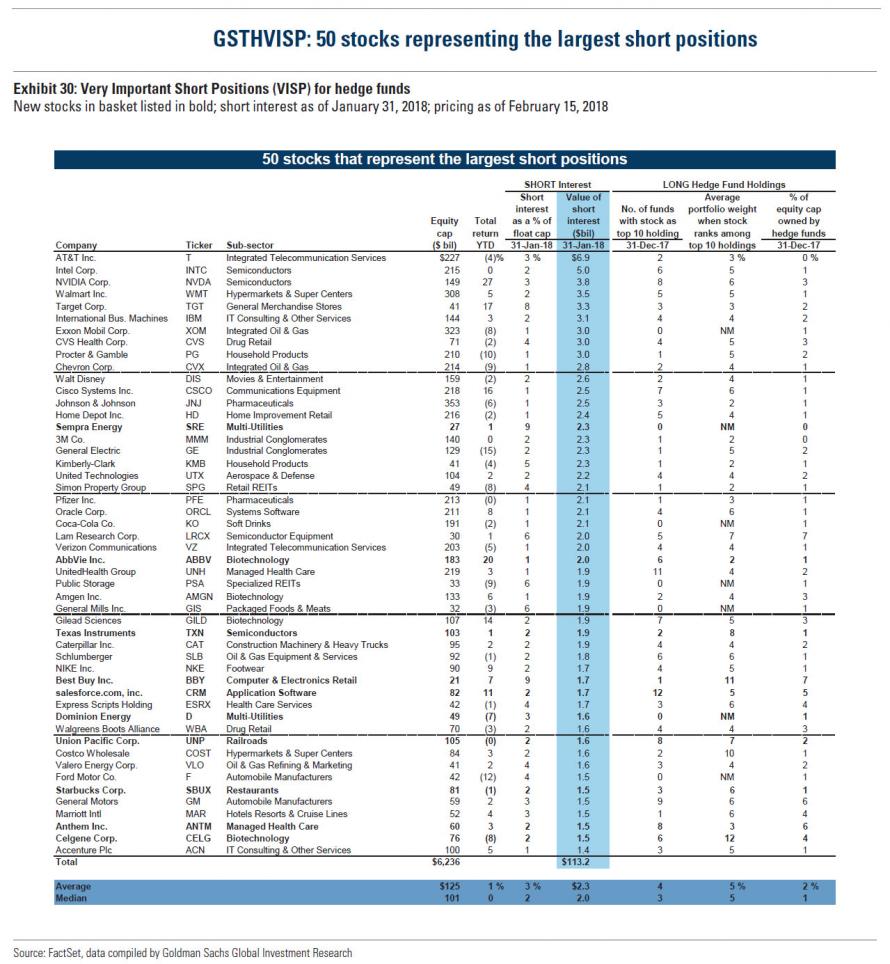 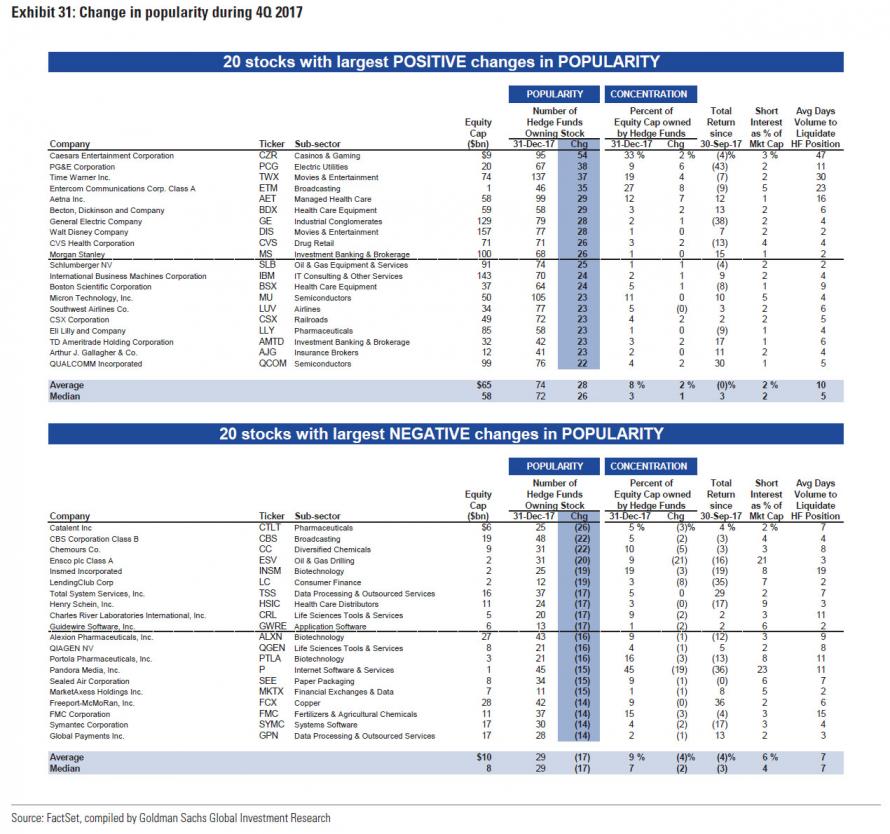 The basket of 20 firms with the largest share of market cap owned by hedge funds (ticker: GSTHHFHI)has lagged the S&P 500 by 11 pp in 2017, its worst annual performance since 2007.The weakness was driven primarily by two Health Care firms (EVHC and INCY). The basket had outgained the S&P 500 by an average of 9 pp in each of the five years from 2012-16. 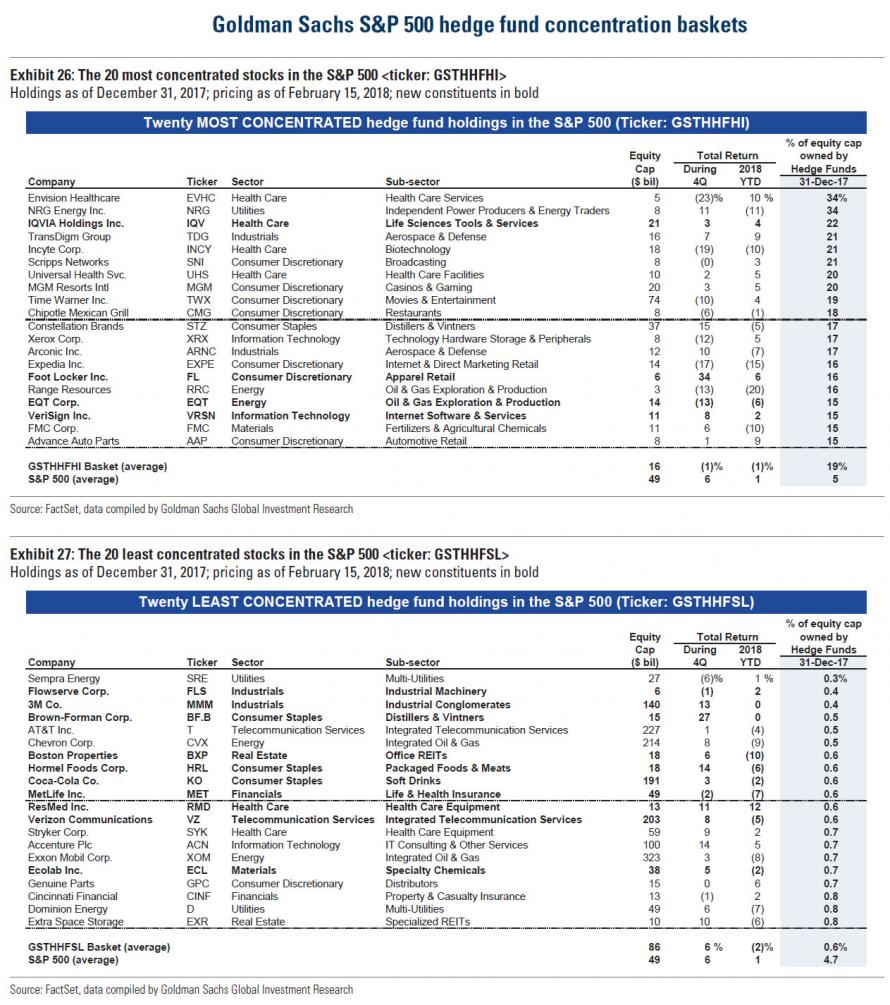 It would be very wise of you to study ourdisclaimer, ourprivacy policyand our (non)policy onconflicts / full disclosure. Heres ourCookie Policy.