Are Currency Hedged Or Unhedged Stock And Bond Funds For You?

Home/Blog/Are Currency Hedged Or Unhedged Stock And Bond Funds For You?
Previous Next

Are Currency Hedged Or Unhedged Stock And Bond Funds For You?

Foreign bonds are almost always better to currency hedge so they can fulfill their volatility moderation role.

Foreign stocks are generally best hedged in retirement, and may be better unhedged during long-term periodic accumulation.

On balance, Dollar-based investors owning foreign assets hedged back to the Dollar is generally a good idea.

In the case of bonds, we think currency hedging is virtually always a good idea.

In the case of stocks, we think it is typically a good idea, unless you believe you have the time and skill to switch back and forth profitably between hedged and non-hedged stocks – and that you have the discipline and emotional strength and consistency to deal with the whipsaws that come with that approach. Alternatively, you may find actively managed funds that effectively adjust their portfolio back and forth between hedged and unhedged.

For those in the accumulation stage with long-time horizons and doing Dollar-Cost-Averaging; the extra volatility of unhedged foreign equities could be an advantage. Volatility is helpful with regular periodic investing, and harmful with regular, periodic withdrawal. Therefore, retirees are better served by the volatility reduction that Dollar hedging is supposed to provide.

The array of hedge funds has proliferated and a review of unhedged fund substitution with hedged funds for suitability is advisable.

There have been prolonged periods where one approach or the other has been superior, but in the very long term the currency effect may be a wash.

These two charts based on MSCI indexes (one for Euro Zone stocks and one for Japanese stocks) show the cumulative and monthly return differences from 1999 through March 2015: 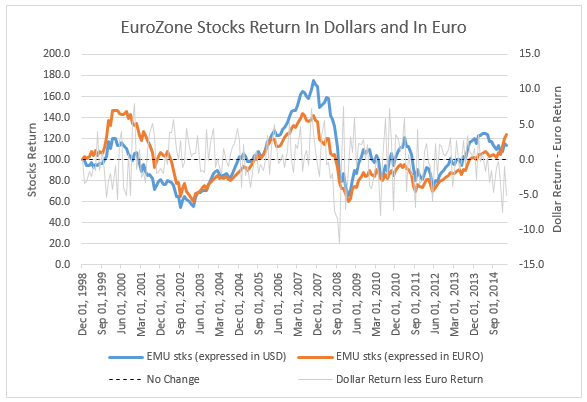 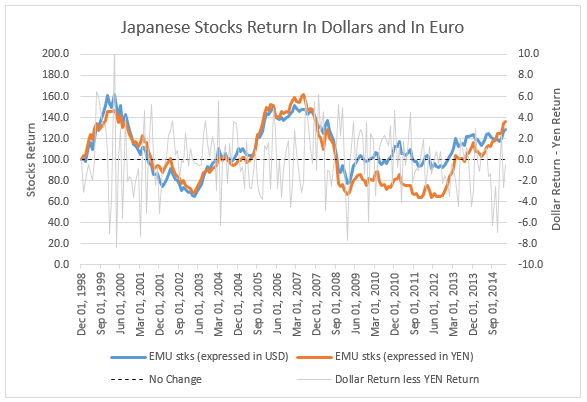 You can see from these charts that the monthly returns (thin gray lines) vary wildly. The cumulative return differences (blue and orange lines) can have periods of several years of differential performance of hedged versus local currency returns. Even though there are substantial periods of differential performance, the volatility is so significant, that whipsaws are a real impediment for many investors who wish to ride the currency trends by switching between hedging and not hedging.

Vanguard said in To Hedge or Not To Hedge: Evaluating currency exposure in global equity portfolios published in September 2014:

A reasonable forward-looking assumption is for an unhedged and a hedged investment to produce similar gross returns over long time horizons.

But that is over the long term. Over shorter periods of a year or two or three, for example, the choice to hedge or not hedge is quite material.

For global giants currency effect is hard to pin down. Major US companies may be massively exposed to foreign exchange; and foreign domiciled companies may do large portions of their operations in the US or in Dollars.

Global multi-national companies may be doing a substantial amount of currency hedging internally.

For a concentrated portfolio of global multi-national companies, the question of currency hedging at the portfolio level many be a more debatable one. 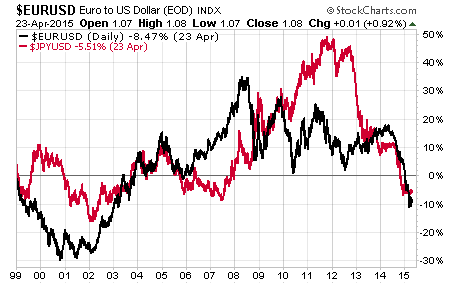 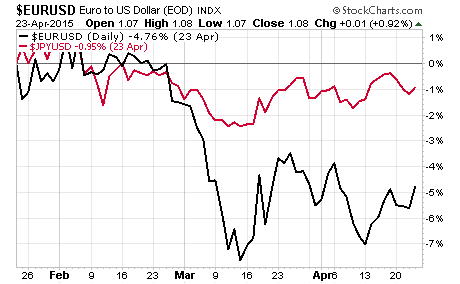 Similarly, from 2002 through 2004 with the Euro rising versus the Dollar, if you chose to invest in the Euro Zone countries, you would have done better owning an unhedged fund such as the Germany ETF (NYSEARCA:EWG). However, from the 2008 crash through today, the Euro has been on a volatile up and down ride versus the Dollar, and you needed to switch back and forth several times to be on the right side of the currency trends. Over the past year, a hedged Germany fund, such as HEWG would have been the superior performer.

With Dollar Cost Averaging Unhedged Equities May Be Better:

Of note for investors with long-term horizons, particularly those doing regular periodic dollar-cost average investing; there would have been little benefit of seeking hedges. As you can see over periods of 10 and 15 years, currency effect can amount to virtually nothing. And, those doing dollar-cost average with an unhedged fund would have benefited by the volatility and peaks and troughs along the way.

They both show the substantial outperformance of the hedged approach during that time period. 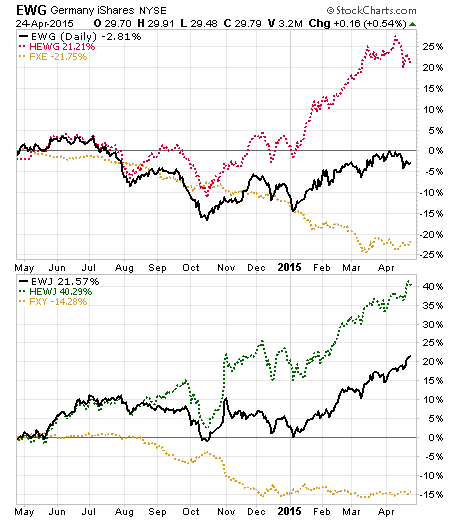 Over the last 3 months, however, both the Euro and the Yen seem to have stabilized against the Dollar. Over 3 months hedging showed no advantage, and in fact a slight disadvantage to owning the hedged equity funds. 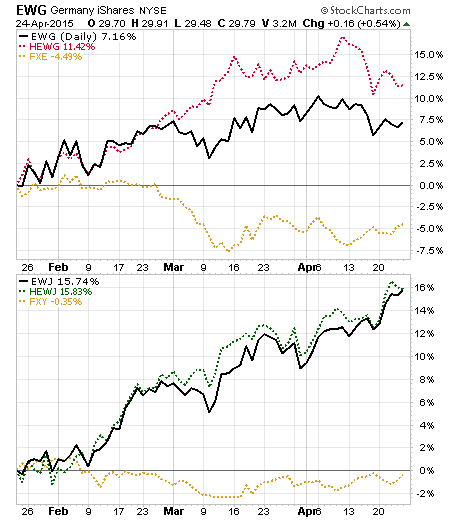 If the current generally flat exchange rate performance of the Euro and the Yen is to continue, or is harbinger of a weakening of the Dollar, then the unhedged forms of the Germany and Japan equities (EWG and EWJ) would be the superior choice for those moving between hedged and unhedged.

With QE increasing abroad and the Fed moving away from QE, an argument can be made that further Dollar strength is ahead, and that hedged equity funds are a better choice for total return. The consensus is that the Dollar has more strengthening ahead. How far and how long the Dollar will rise is, of course, uncertain.

If you are young and Dollar-Cost Averaging, consider using unhedged equity funds.

If you are retired and withdrawing assets (without excess assets), consider using hedged equity funds.

If you are good enough with calling trend reversals (as opposed to volatility noise) and can live with a certain percentage of decisions being wrong due to whipsaw markets, then moving between hedged and unhedged investments may be suitable for you.

If you are a Dollar-based investor and will not chastise yourself for sticking with Dollar investments when unhedged assets outperform, then stay with hedged funds.

If you dont have a view, and arent one of the above, it may make sense to split the baby – 50% of international stocks hedged and 50% unhedged.

With foreign bonds hedging is a more clear-cut decision, unless you actually want to trade currency, but then you might be better off doing that directly in the FX or futures markets. U.S. investors are likely to want bonds in their portfolio to reduce overall volatility, and/or also to match certain Dollar-denominated capital expense or periodic withdrawals intentions. Hedging helps realize those goals. 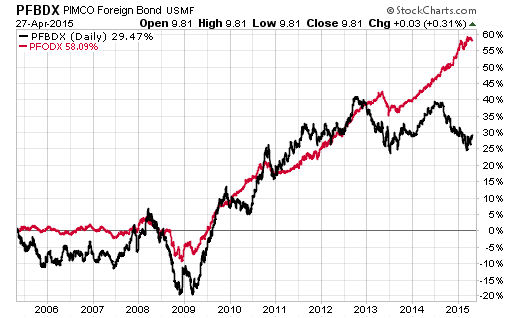 Vanguard makes the point that international bond funds should be hedged all the time. They said this in an interview on their website Total International Bond Index Fund: Why and How We Hedge (June 17, 2013):

Foreign currency exposure by far dominates the volatility profile of international bonds. It accounts for about two-thirds of volatility. So currency hedging will minimize that currency volatility or currency risk. 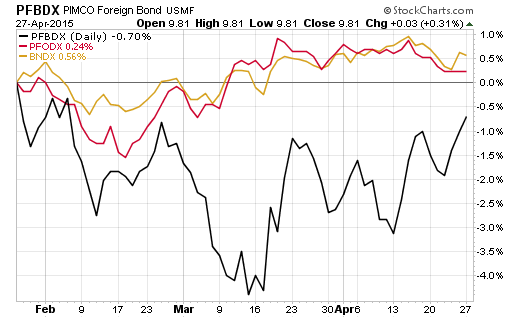 Vanguard goes on the say this about foreign bond hedging,

investors can isolate the interest rate and the credit risk and can maximize the diversification benefit that international bonds bring to their portfolio … [the portfolio] uses one-month forward currency exchange transactions, as the index is rebalanced the last business day of the month.

There is a cost associated with currency hedging … Liquidity is crucial to keeping costs low … Eighty percent of Vanguards Total International Bond Index Fund will consist of euros, Japanese yen, and British pound exposure. … those are three of the most liquid currencies in the world. … those currencies will be hedged back to the dollar, which is the most liquid currency in the world. So the cost of hedging … will be minimal.

Bonds are best used when denominated in or hedged back to investors home currency – hedge all of the time.

International bonds are a poor way to speculate on currency swings.

Speculating in currency exchange rates is best accomplished directly with FX instruments, not piggy-back on bond or stock instruments.

For stocks currency makes a significant difference over the short term and intermediate term, but over the long term it pretty much a wash.

You have to be effective at trend and trend reversal analysis to move back and forth between hedged and unhedged equities with satisfactory results.

Disclosure:QVM has positions in PFODX and BNDX as of the creation date of this article (April 28, 2015). We certify that except as cited herein, this is our work product. We received no compensation or other inducement from any party to produce this article, and are not compensated by Seeking Alpha in any way relating to this article.

General Disclaimer:This article provides opinions and information, but does not contain recommendations or personal investment advice to any specific person for any particular purpose. Do your own research or obtain suitable personal advice. You are responsible for your own investment decisions. This article is presented subject to our full disclaimer found on the QVM siteavailable here.

Additional disclosure:Disclosure: QVM has positions in PFODX and BNDX as of the creation date of this article (April 28, 2015). We certify that except as cited herein, this is our work product. We received no compensation or other inducement from any party to produce this article, and are not compensated by Seeking Alpha in any way relating to this article.